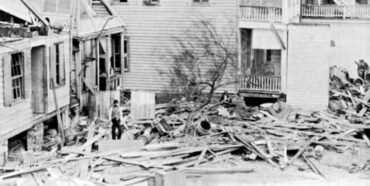 On the night of August 27, 1893, a major hurricane, the largest and most powerful to hit South Carolina until that time, made landfall just east of Savannah, GA, with maximum sustained winds of 120mph and a storm surge as high as 12 ft. Hilton Head Island and Mitchelville bore the brunt of the storm; it is estimated that approximately 2,000 people died, mostly due to the storm surge.

Although the hurricane was devastating, the American Red Cross did not arrive until October 1, possibly because of ongoing efforts following another hurricane that hit South Carolina in June. The state and federal government’s indifference to the threat of a famine appalled Clara Barton, founder of the American Red Cross and president at the time.

The U.S. Congress specifically denied the request from the Red Cross for money to help. Private donations funded the drive to help the stricken people. Fortunately, Clara Barton had spent a few months on Hilton Head Island during the Civil War. She knew the lay of the land, the creeks and some of the people. At the age of 72, she agreed to take charge.

Barton had to appeal northern donors for cash, food, clothing and other supplies through newspapers across the entire eastern half of the United States. The hurricane’s victims had to do the rebuilding themselves.

Relief efforts were impeded by a second Category 3 hurricane that struck just north of the area, near Charleston, South Carolina, on October 13. Damages from the storm totaled to at least $1 million (1893 USD).